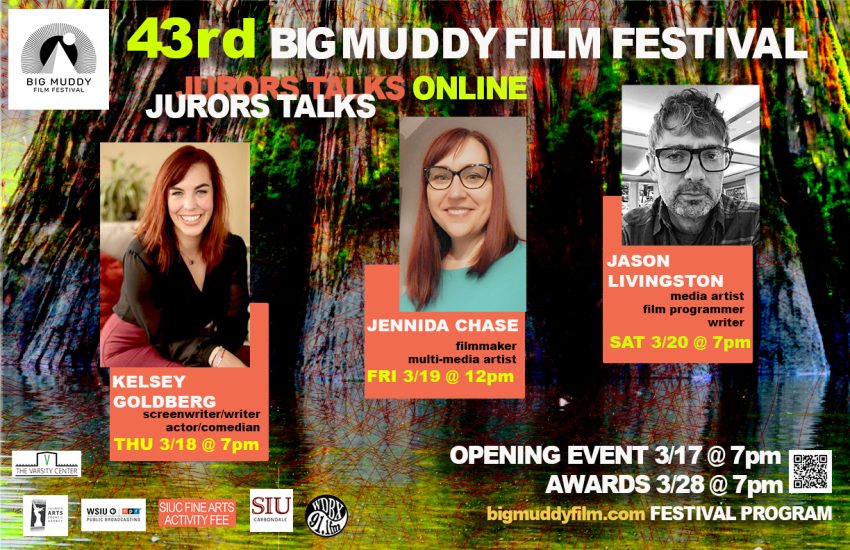 One of the things that’s kept the Big Muddy Film Festival going so long has been in the strength of the jurors who agree to spend time with us and let us learn from their work and experience . Over the years we have hosted Jim Jarmusch, Barbara Hammer, Naomi Uman, Jim Jarmusch, Kerry Laitala, James Benning, Tomonari Nishikawa, Anna Margarita Albelo, Ben Kalina and Alrick Brown, and I can go on. The festival is so pleased to announce this year’s jurors; Los Angeles screenwriter and actor Kelsey Goldberg, multimedia artist Jennida Chase and writer, programmer, and artist Jason Livingston. Presentations: March 18 at 7pm (Kelsey), March 19 at 12pm (Jennida) and March 20 at 7pm (Jason). All will be livestreamed and cast to facebook (or vimeo)- still working on that!

Kelsey Goldberg is a writer and actress known for Over Easy (2017), Pete Winning and the Pirates (2015) and a co-writer of Unearth (2020), a feature length fracking horror story. Unearth follows two neighboring farm families whose relationships are strained when one of them chooses to lease their land to an oil and gas company.

Jennida Chase , a multi-media artist who primarily works with film, video, animation, sound and photography. Her work has been extensively shown in galleries, museums, art fairs and film/video festivals worldwide. She regularly collaborates and exhibits under the moniker of s/n and has created, screened and exhibited numerous media-art, video and sound projects internationally.

Jason Livingston is a writer, film programmer, and artist. His award-winning work has screened widely, including Rotterdam, Anthology, the Austrian Museum, and the Vancouver Art Gallery. Under Foot & Overstory is distributed by the CFMDC, and Lake Affect is available through EAI’s Experimental Television Center collection. Awarded residencies include the Millay Colony and the Virginia Center for the Creative Arts. Jason is pursuing a practice-based PhD as a Presidential Fellow with the Department of Media Study at the University at Buffalo.  He holds a B.A in Philosophy from Cornell University, and a M.A. and M.F.A. in Cinema from the University of Iowa.  He currently serves on the Board of Trustees with the Flaherty Seminar.

This site uses Akismet to reduce spam. Learn how your comment data is processed.